Tenements E53/1603 cover part of the Kukabubba palaeochannel, which has been delivering uranium into the Lake Way system for millennia. Triggers for uranium precipitation within the channel could include changes in the chemistry of groundwater at the confluence with tributary channels, such as the channel which joins the Kukabubba palaeochannel just before it enters Lake Way (see figure). This confluence location is associated with a radiometric anomaly. This anomaly has been partly tested by broad spaced historical drilling that indicates that the source of part of the anomaly is uranium mineralised calcrete. Once tenure has been granted the extent of the mineralisation at the confluence location will be determined by drilling, with the objective of defining an initial resource.  In addition, a reconnaissance surface geochemical survey will be carried out along the remaining (upstream) section of the palaeochannel in order to test other identified radiometric anomalies for the presence of uranium.

Ratios of the radioelements can assist with identifying potential uranium deposits. Wyborn et al (1994#) showed that alteration zones associated with Coronation Hill-style mineralisation have slightly elevated uranium, but are strongly depleted in thorium compared to the surrounding rocks that have high levels of both uranium and thorium.  The square of the uranium value over the thorium value (U2/Th) proved effective in highlighting uranium mineralisation in the Pine Creek area in the Northern Territory.

The U2/Th ratio has also been shown to be effective in separating primary uranium, associated with uranium-bearing granites, from secondary uranium associated with palaeochannel calcrete such as at Yeelirrie in Western Australia (Wilford et al 2009*). This is because U is mobile relative to Th during weathering. High U2/Th ratio 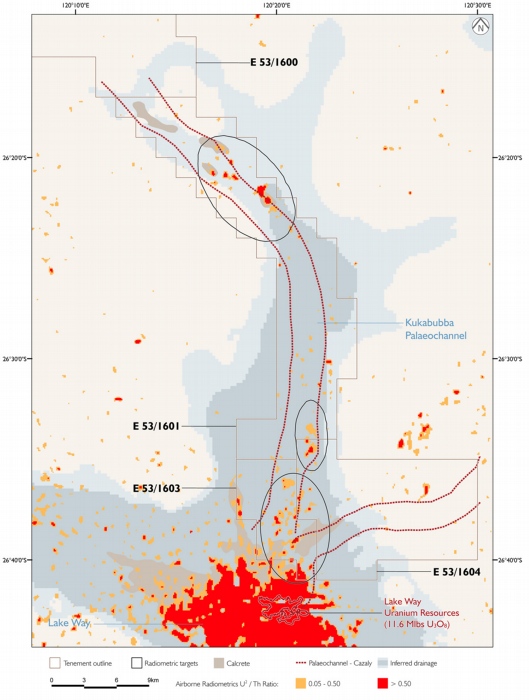