The Narnoo Project consists of tenement E28/2097 and located on the margins of the Eucla Basin – which flanks the south-east Yilgarn Craton. The total area of the Narnoo Project is around 15 km2 (Figure 1).

The extensive sand cover resulting from eroding beach ridges on the Eucla Basin margin masks the radiometric signature of uranium deposits within the prospective sediments. This means that radiometric data are a poor guide to uranium prospect in this region. Radiometric data are shown in Figure 7 and it is apparent that there are no radiometric anomalies associated with the known deposits. The Company carried out a ground gravity survey over parts of the Narnoo tenement package in mid-2012. It is planned to extend the survey to the entire tenement package. The data will be used to focus on exploration activity by mapping concealed palaeodrainage lines and related sediments and identifying targets for follow-up drilling. 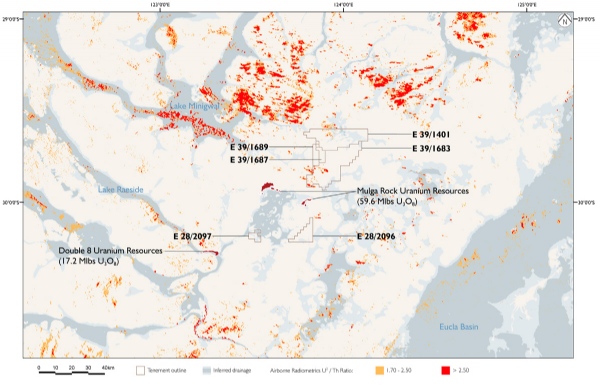